skip to main | skip to sidebar

I have a new blog located at http://iapetancaptain.wordpress.com that will be more geology related if anyone is interested. It might include a drawing or two when the mood strikes me.
Posted by ihatefancybirds at 4:24 PM 1 comment:

Five hundred million years ago the East Coast of the United States was fairly different than what is generally recognized today, mostly because it didn’t really exist. At this point in time the eastern coast of what is now considered America was somewhere along the border of Ohio and West Virginia. While the mid-Atlantic region was for the most part present, it was buried beneath a warm shallow sea, and not yet the natal home of Willard Scott. This was all about to change though as off the coast a volcanic island arc was approaching on a collision course. 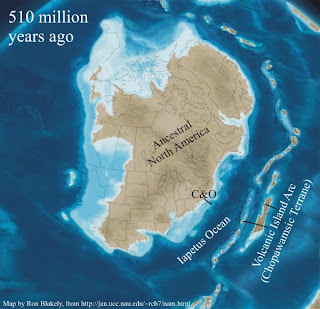 As the proto-Atlantic ocean was closing due to subduction, the volcanic island arc was depositing graded-beds of sandstone (graywhacke) onto the seafloor. These will be significant as they end up being the major constituent of the Washington D.C. area’s bedrock, and can be seen predominantly throughout the park. The volcanic islands made landfall with the North American plate around 460 million years ago and caused the suturing of the two terranes. This tectonic event is what caused the majority of deformation we witnessed along our hike/study, including metamorphosing the graywhacke into METAgraywhacke. It was now ready to take on Godzilla for the rights to torment tiny Japanese cardboard buildings.

Evidence for this tectonic event, known as the Taconic Orogeny, can be found beyond that of just metamorphosed sandstone, but also in the much more picturesque folding of that sandstone, as seen below. We also saw evidence of metamorphism in the presence of boudinage, which look similar to rock sausage links.
*side note: Microsoft Word is not a fan of geologic terminology. All of my words have red squiggly lines underneath them. 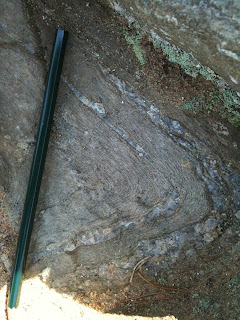 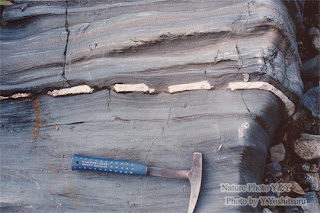 When the graywhacke was originally being deposited in the along the base of the volcanic terrane it collected in a pattern of coarse grains to fine grains as the energy of the water lessened. Even though these graded beds have gone through metamorphic stresses they can still be seen. The beds are also a good indicator of what orientation “up” was when the rocks were being deposited as the coarsest grains are always on the bottom. Geopetal structures like graded bedding can come in useful when dealing with folded areas which may have been overturned at some point. 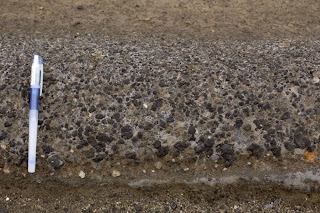 Hiding amongst the plethora of metagraywhacke was an indicator of even older tectonic forces. Down near the end of Mather Gorge where the broadens and turns we found amphibolite, a metamorphosed mafic rock characterized by its rough texture with a alligator-skin-like look to it. The amphibolite was dated to around 530 ma and can be attributed to ocean floor of the . When the volcanic island arc pushed the graywhacke up onto the continent the amphibolite was sent packing with it. There is a noticeably large boudin hiding amongst the metagraywhacke that was probably broken off during the Taconian or Acadian Orogenies. We know that the Acadian had an impact on the area as located up river from the amphibolite are sets of lamprophyre dikes striking their way through the bedrock. (These will be further discussed in Part III in relation to the fault).

Up next we go fault exploring.

Posted by ihatefancybirds at 12:29 AM No comments:

A few weeks ago my Structural Geology class went hiking along the Billy Goat Trail at Great Falls National Park in Maryland. While on the trail we discussed the bedrock, geologic history and any deformation structures witnessed along the trail. For some of us, including myself, this was our initiation to using the lab techniques in the field. Such practices as taking the strike and dip of a joint or foliation became much more real along the hike.

We set out early from the George Mason campus, and got to Great Falls before it got crowded. The weather was going to be great, and I made the mistake of wearing dark jeans. Growing up in the D.C. area I had been to Great Fall many times, but never before armed with knowledge or geological prowess I now possessed. Now every mylonite, tension gash, and ptygmatic fold would jump out at me like a overeager house pet. Well, maybe more like a docile goldfish. Either way the intent of this trip was far beyond just looking at water moving downstream. While there were plenty of lessons to be learned about the bedrock and history of the area we were also tasked with determining whether or not Mather Gorge is controlled by a fault underneath the river.

Looking at the satellite image of Great Falls below it is noticeable that the curvature and broadness of the Potomac River is lost for about a half mile. This area is known as Mather Gorge, and is the subject of debate on what causes the river to straighten so narrowly at this point. Some believe that there is a fault line lying beneath the gorge which is the cause. Faults are weaker areas since the rock is being moved or pulverized by the fault slippage. Rivers and other water flows are drawn to weaker areas since they are easier to cut into. If there is a fault beneath Mather Gorge, it would make sense for the Potomac River to make its path along the fault line since it would be easier to cut into than the surrounding bedrock of metagraywhacke. Once out of the supposed fault zone the river broadens and turns as it approaches the Atlantic Coastal Plain. 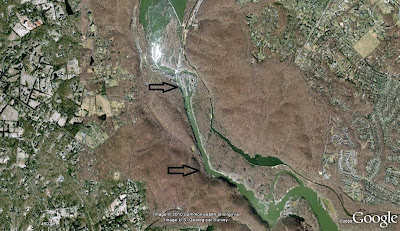 Armed with our Brunton Compasses we were going to strike and dip our way down the Billy Goat Trail collecting randomly determined amounts of data from every joint, foliation, and…well, mostly those two things, joints and foliations. But, with that data we would be able to hypothesize whether or not we thought there was a fault or not.

But before we get there, let me tell you a bit about the geologic past of the Washington D.C. and Great Falls areas:

Posted by ihatefancybirds at 10:02 PM No comments: